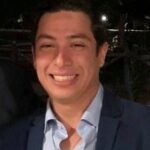 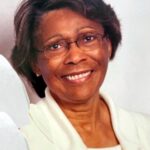 In your prayers please remember Carrie L. Reed who died on May 11, 2021. Carrie Reed is the wife of Burke Reed, former teacher and coach at Holy Cross of San Antonio.

Carrie Leonard Reed, was a loving wife and wonderful mother with a love for travel. With husband Burke at her side, her many travels took her to every continent except Antarctica. She was a dedicated educator and retired in 2003 from East Central ISD.

She was preceded in death by her parents, Joseph and Virginia Leonard; and sisters, Sadie Fleming (Royal) and Josephine Battley (Bill).

A Private Graveside Service and burial will be at the Ft. Sam Houston National Cemetery at a later date.  In lieu of cards and flowers, please make a donation to a local food bank or charity.  May she rest in peace. 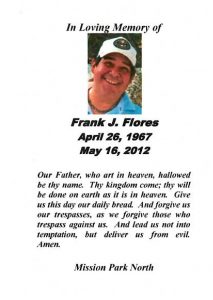 Gus graduated from Holy Cross High School, Class of ‘77. For over 40 years, he owned and operated Hurricane Pest Control.

A loving husband, father, brother, friend, and fisher of men, Gus was a devoted servant to all who called upon him. While he will be dearly missed, he will not soon be forgotten. May you follow his example of giving, as he followed in Christ’s before him.

Flowers appreciated and/or a donation can be made in memory of Gus to his alma mater, Holy Cross High School, 4-2-6 Scholarship, Attn: Rene Escobedo, 426 N. San Felipe, SAT 78228.

Livestreaming will be available on Sunday, March 28, 2021.

To send flowers or a memorial gift to the family of Gustavo “Gus” Dominguez please visit our Sympathy Store.

Please keep Gerald J. Castillo and his family in your prayers as went into eternal rest on December 23,2020. Gerald “Jerry” Castillo Class is from the class of 1974 and his older brother “Jesus“Jesse” Castillo is from the Class of 1965. Prayer Card for Jerry.  Please have him entered.

On Wednesday, March 17, 2021
At Sunset Funeral Home on Bandera Road

Clyde William Harlow, Sr. adored father, entered eternal rest on February 24, 2021. Clyde, known to most as William, was born in San Antonio, Texas on May 28, 1957. He was part of the brotherhood of Holy Cross High School graduating in 1975. Soon after he graduated from St. Phillips College with an Associate of Accounting. William will be remembered for his strong work ethic, love of coaching and music. His highest legacy is that William is the epitome of a devoted and loving father. He is preceded in death by his parents, Lucille and Richard Harlow, Sr. and his brother Richard Harlow, Jr. William is survived by his daughter Cynthia Marie Harlow-Cepeda, his sons Clyde William Harlow, Jr., Glen Harlow, and his son-in-law Joe Anthony Cepeda. He is also survived by his sisters Irene Aguayo, Eileen Guajardo and brother Glenn Harlow.

Mass -8:30am with a private burial following at Cordi Marian.

She was born in San Antonio, TX on December 9, 1954. Kathleen graduated from Memorial High School in 1972 and married Juan C. Mata on October 6, 1973. She was a loyal wife, mother, grandmother, sister, and friend. She was proud of her three children and was their biggest fan, never having missed a game, play, recital, or band performance. She adored her granddaughters and cherished her moments with them. Her career included working at Globe, Kmart, Holy Cross of San Antonio before spending 22 years at the Bexar County Tax Office. She was an avid Fiesta San Antonio fan, rarely missing a Battle of Flowers or Fiesta Flambeau Parade. Her love of Fiesta led her to proudly collect Fiesta medals which she wore to many Fiesta events. She was a family person, kind, and caring because of this she led her life through a Servant’s Heart, choosing to serve others before herself. She could often be found cheering on her friends or relatives at CYO or High School games. She had a love for children and supported all, not just

Kathleen was preceded in death by her parents, Mary Alvarado, and Wenceslao Henry Alvarado, brothers Richard and Joe Henry.