2:00 PM Mass of the Resurrection

10:00 AM At San Fernando Cathedral

Mass of the Resurrection

On behalf of Holy Cross of San Antonio, we hope you enjoy the fourth issue of the Holy Cross Annual Report 2012-2013.

Thank you for your ongoing support of our mission.

On Jan. 8, Councilman Cris Medina of District 7, visited with the Student Knight Ambassadors as part of the Holy Cross President’s Speaker Series. Councilman Medina addressed the topic of “Leadership & Civic Involvement at the Local Level of Government.”

Councilman Medina encouraged the students to continue their education upon graduation from Holy Cross. He shared with them his own life experiences which shaped his path toward public service.

“It takes hard work, dedication and sacrifice,” said Councilman Medina. “It’s all worth it when you know you’re making a difference in the community.”

“I know you will fulfill your potential,” said Councilman Medina. “I look forward to seeing great things come from all of you.” 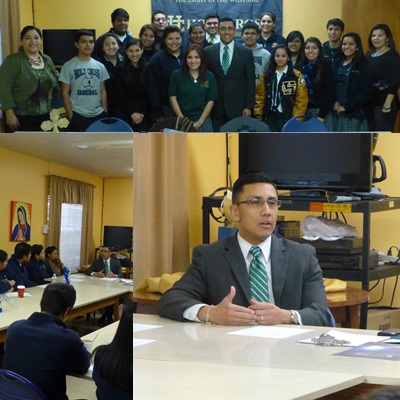 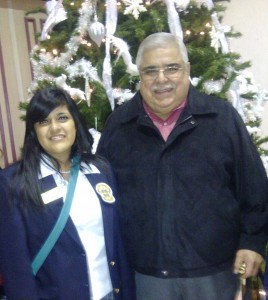 WHO: ALL MEDIA INVITED. The Gates Millennium Scholarship has selected Holy Cross of San Antonio’s senior, Bianca Rosas, making her the third recipient in the school’s history. The Office of Congressman Joaquin Castro has issued a congratulatory letter which will be presented at the official announcement & ceremony. Additionally, Texas Representative Justin Rodriguez has passed a resolution in the scholar’s name and an official announcement will be made.

WHAT: Holy Cross of San Antonio’s senior, Bianca Rosas, is named the Gates Millennium Scholar 2013. Out of 54,000 applicants, she is one of 1,000 talented students nationwide selected for this distinguished and highly competitive scholarship which will cover her Bachelor’s, Master’s and Doctoral degrees. Ms. Rosas will be attending St. Edward’s University in Austin and pursuing her degrees in public health.

WHY: The Gates Millennium Scholars (GMS) Program selects 1,000 talented students each year to receive a good-through-graduation scholarship to use at any college or university of their choice. The GMS provides scholars with personal and professional development through leadership programs along with academic support throughout their college career.

Holy Cross of San Antonio is an independent Catholic co-educational middle and high school. The Brothers of Holy Cross founded the school in 1957 steeped in tradition and education. Holy Cross serves as the only co-educational college preparatory school centrally located in San Antonio’s Westside. Based on the principles of the Brothers of Holy Cross, the school’s educational mission helps break the cycle of poverty and opens doors to higher education. For more information, visit www.HolyCross-SA.com or call 210.433.9395.

EDITOR/PRODUCER NOTE: Interviews will be made available at event.