WHAT: Samuel Moreno, senior at Holy Cross of San Antonio, will do an official signing to Oklahoma Panhandle State University. The university has offered him a partial athletic-baseball scholarship and a partial academic scholarship to attend Panhandle State University in August 2013.  He excels both academically and athletically.  Moreno ranks 3rd in his class. He plays second baseman for the Holy Cross Knights baseball team. He also played quarterback for the Holy Cross Knights football team. His football team made it to state finals in November 2012. He will be joined at his official signing by his parents Mr. Tony and Mrs. Ruby Moreno.

REMINDER FOR ALUMNI:
Please note that the Alumni Association meeting is set for Thursday, April 18, 2013 at 7:00 p.m. / Convocation Center

· Senior Class Luncheon sponsored by Alumni Association
· Holy Cross Immersion Program – Pilgrimage
· President’s Blue and Gold Gala, September 21, 2013 – Alumni Challenge
· Tournament contributions – process and method of payment
· Parking lot registration –  process and method of payment
· Tournament sponsors and banners
Mark your calendar for these events:
· May 16, 2013 at 7:00 p.m.  / Captains meeting – brackets and rules
· May 24, 2013 at 6:00 p.m. / KICK-OFF Memorial Day Weekend Event, Convocation Center, FREE refreshments, music, and light snacks
· May 24 – 26 / Memorial Day Weekend Alumni Tournament
Congratulations to the class of 1988 for being the first to register and pay for this year’s tournament. The class of 1974 and the class of 1984 have also paid for this year’s tournament.
Hope to see many Knights at the Alumni Association meeting.
Sincerely,
Paul Martinez, Ph.D.
Alumni President, Class of 1984

WHAT: Holy Cross of San Antonio will host an unveiling ceremony of a bronze bust of Saint André Bassette, C.S.C. sculpted by Jerry McKenna.  Alejandro Barragán, Class of 2014, is scheduled to receive the Boy Scout’s highest honor as Eagle Scout. As part of his Eagle Scout Leadership Service Project, he raised the funds to purchase a McKenna sculpture of St. André. Joining Alejandro at the ceremony will be Mr. McKenna, Mr. Jaime Medel, Scout Master, Holy Cross Board of Trustees, faculty and students as well as his parents, Mr. and Mrs. Rudy Barragán and relatives. The statue is being dedicated in memory of Mr. Eloy Chavarria, Class of 1982, a highly decorated military serviceman. His wife, Elsa, and family will be present.

WHY: Alejandro Barragán is a junior at Holy Cross of San Antonio and a member of the Boy Scouts Troop 450, Alamo Area Council. Alejandro chose as his Eagle Scout Leadership Service Project to raise the funds for a rare Jerry McKenna sculpture of the St. André bronze bust. Mr. McKenna, an accomplished sculptor, is also the sculptor of the bronze Four Horsemen at the University of Notre Dame. He too attended a Holy Cross founded school, St. Edward’s High School in Ohio. St. André was the first Brother of Holy Cross to be Canonized as a Saint proclaimed by Pope Emeritus Benedict XVI and officiated by the Vatican on Sun., Oct. 17, 2010.

Bio of Alejandro Barragán, Class of 2014:

Mark your calendar for these events:

Hope to see many Knights at the Alumni Association meeting.

The Holy Cross Poker & Casino Night for April 13 has been postponed. The new date will be posted when plans are finalized.

Thank you for your support! 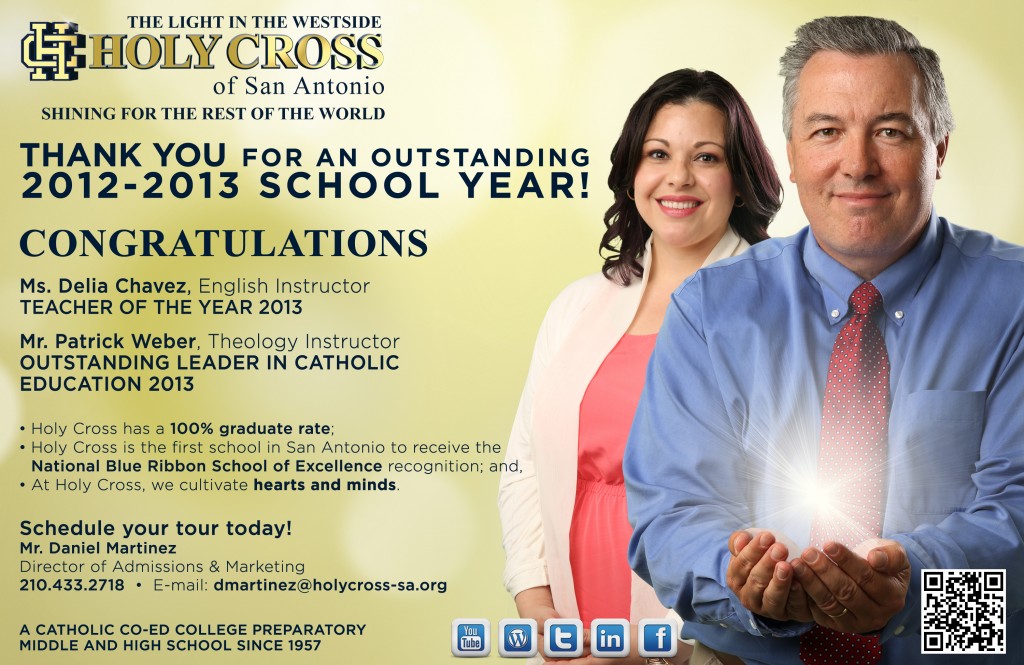 The first Saturday of each month, the parents of the Student Knight Ambassador (SKA) Program will be hosting a rosary starting at 8:30 – 9:00 a.m. in the Chapel (located in the Business Building formerly the Brother’s residence). We will be lifting up special intentions for the families of Holy Cross students and alumni. It is open to our Holy Cross community. Please bring your own rosary and join us.

The class of 1963 reunion committee will hold a meeting on Tuesday, April 9th in the Holy Cross Library. Proceeds from the the June 22nd event will be used to begin The Brother Stanley Culotta Scholarship fund.