The varsity football team scored three times in the first quarter to put the Southside Cardinals on their heels early. Scoring for the Knights were Tyler Cardenas, James Stark, DJ Kirkendoll, Pete Rivera, and John Libby.

JD Hernandez attempted only 9 passes but he completed 7 of them for 214 Yards and 4 TD’s.

Pete Rivera returned a fumble 23 yards for a touchdown.

The offense punches in an early TD.

This RB is not having a good day.

James Stark shakes the first guy and keeps on running. 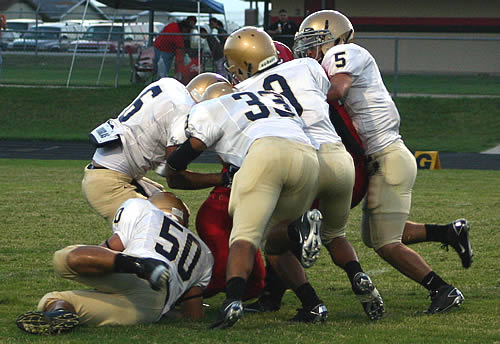 An example of the "swarm" thing I was talking about.