Holy Cross National Honor Society and Volleyball Team members presented a check in the amount of $1,114.95 to the American Cancer Society for cancer education, research and awareness.  Ms. Ana Melissa Cavazos, Director of Development for the Southwest Region of the American Cancer Society, accepted the check on the organization’s behalf on Oct. 27.  NHS and Volleyball team members raised the funds during the month of October which is National Breast Cancer Awareness Month.  The school held a “Pink Out Day” where all students wore a pink t-shirt in solidarity with cancer survivors. 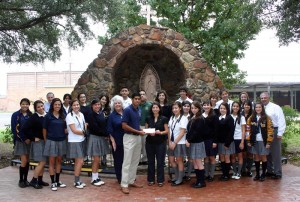 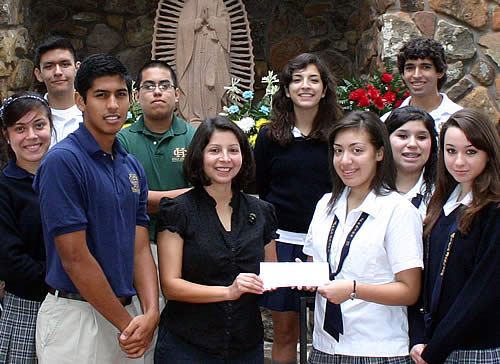 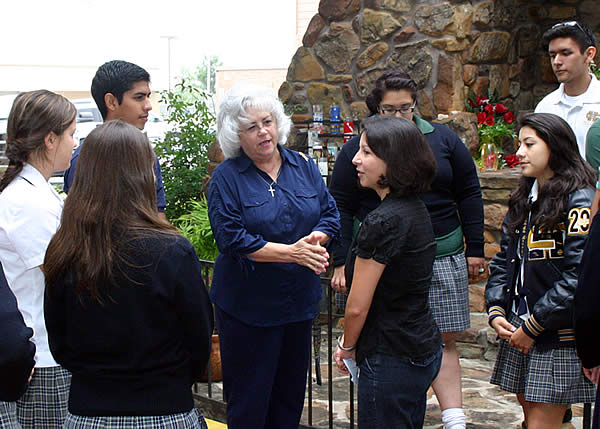 Jason Torres, Class of 2003 has enrolled at the University of Chicago graduate school to pursue a degree in Molecular Metabolism and Nutrition.  Along with his acceptance he has been awarded full tuition coverage and living expenses.  After graduating from Holy Cross Jason entered and graduated from St. Mary’s University in 2007.  During these intervening years he taught with the Kaplan Testing Center but persisted in his desire to pursue a career in the scientific field.  During this time Jason met and discussed his hopes with Robert Alaniz, Class of ‘87 and Alfred Alaniz, Class of ‘74.

Robert has his Ph.D. and is an Assistant Professor in the Department of Microbiology at Texas A & M College of Medicine.  Alfred has his Ph.D. in Astronomy and teaches at San Antonio College.  Through their encouragement and availing himself of their experiences, Jason met representatives of SACNAS (The Society for the Advancement of Chicanos and Native Americans in the Sciences).  Jason applied to the University of Chicago and was accepted. He started his studies this fall.

It was during the Annual Alumni Softball Tournament that Jason got to know Alfred and Robert Alaniz.  He proudly gives thanks for his good fortune to his Holy Cross connections.

Hey Knights, you might want to have breakfast with some fellow alumni.  A popular get-together for some Holy Cross Alumni is breakfast on the first Thursday of each month.  Everyone is welcome.  Reservations are not needed.  Camaraderie is the only agenda.  Come and join us.  Come once and you will definitely return!

When ? The first Thursday of each month

Our mass in celebration of the canonization of St. Andre was a wonderful service. The new gym was beautifully set up for this special occasion. Father Bill was the celebrant. Before the final blessing, the Holy Cross Brothers in attendance were recognized. Thank you Brothers for your lifelong devotion to the Holy Cross mission and thanks to everyone who made such a wonderful day possible. 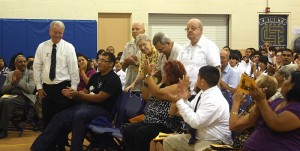 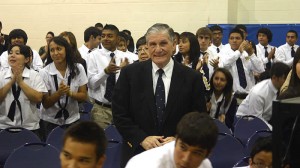 Lawrence “Larry” E. Neil Jr., Holy Cross Class of 1963 passed away Wednesday, October 20, 2010.  Lawrence was born September 21, 1945, in San Antonio, Texas, to Lawrence Neil Sr. and Mary E. Neil. He was active in the Knights of Columbus, the Brazoria County Fair and was retired from Dow as a chemical engineer. Lawrence has been living in Angleton, Texas.

Arrangements are as follows on Saturday, October 23, 2010.

This past week I (Bro. Stanley) attended the introductory meeting of the Catholic School Advantage Campaign.  Launched by the Alliance for Catholic Education at the University of Notre Dame as an outcome of a national Task Force on the Participation of Latino Children and Families in Catholic Schools, the goal of the Campaign is to improve educational opportunities for Latino children.

Among the many dismal statistics describing the educational status of Latino children in the United States is that only 3% (273,000) are enrolled in Catholic schools.  One of the objectives is to double this figure to 6% within the next few years.  The presenter, Rev. Joe Corpora recalled many other frightening statistics such as the level of education, the dropout rate and the poverty of Latinos.

The proposed goal of the Catholic School Advantage Partnership is to maximize the number of Latino children enrolled in Catholic schools in the Archdiocese of San Antonio.  To accomplish these objectives, the Notre Dame team will work in partnership with the Archdiocese of San Antonio.  Additionally, Notre Dame will serve as an ongoing base of operations for research and project development, educate teachers and leaders, and strengthen private and publicly funded scholarship programs throughout the country.

The next session, a working session is planned for late November.  Stay tuned!

This report was presented by Mr. Galindo at the PTC meeting this week.

Thank you.  Our school year has started very positively.  Our students are very focused and prepared for success.  Our teachers are structured, organized, and confident, and our administration is providing great support and direction. 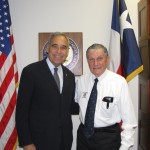 Brother Stanley and the Congressman visited to discuss the capital improvements for the Holy Cross Family Medical Center and Holy Cross of San Antonio. Other issues discussed were medical care and reimbursement, education, youth and drug prevention.  Congressman Gonzalez expressed his shared concerns for the over all health and wellness for the City’s West side community. 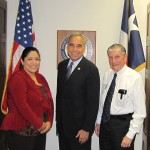 Holy Cross Community Services is a non-profit organization which sponsors Holy Cross Family Medical Center and Holy Cross of San Antonio. To learn more about ways you can support the fundraising efforts for capital improvements at Holy Cross, contact Ms. Garcia at (210) 433-4502 or make a contribution today at: http://www.holycross-sa.com/Donate.aspx. 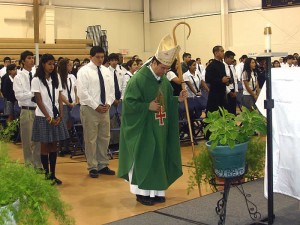 Bishop Cantú celebrated mass with the Holy Cross students and faculty on Oct. 12.

Mr. Henry Galindo, Principal of Holy Cross of San Antonio, presented Bishop Cantú with a special gift of Blessed Brother André Bessette, C.S.C. who will be canonized on Oct. 17 by the Vatican.

Bishop Cantú took a tour of the facilities, visited the Our Lady of Guadalupe grotto and visited the Holy Cross chapel. 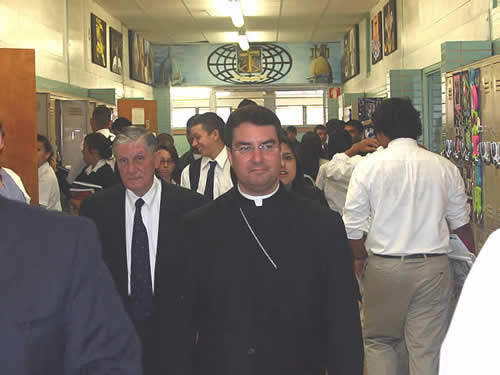 Flu shots will be available to the Holy Cross community including students, faculty and staff on Oct. 14, 7 a.m. – 11 a.m. at the Holy Cross Convocation Center (new Gymnasium).  For patients not covered by insurance the flu shot is $29.95 (includes H1N1) or $34.99 (nasal). Please bring your insurance card with you.